Six years had passed since I last saw a movie based upon a William Shakespeare play. Needless to say, I was not that impressed by it. In fact, I went out of my way to avoid another cinematic adaptation of one of the playwright’s works for years. Image my surprise when I discovered that the 1954 movie movie, “BROKEN LANCE” proved to be another.

Although set in the Old West of the 1880s, “BROKEN LANCE” is based upon elements from Shakespeare’s 1606 play, “King Lear”. It is also a remake of the 1949 movie, “HOUSE OF STRANGERS”, but critics have found connections to the play a lot stronger in the 1954 Western. The latter told the story of an Arizona cattle baron named Matt Devereaux, who has tried to raise his four sons – Ben, Mike, Denny and Joe – with the same hard-working spirit that has made him a successful rancher. However, Devereaux had never learned to express affection to his three older sons, as a consequence. His marriage to a Native American woman resulted in a fourth son – the mixed-blood Joe, to whom he was affectionate. Matt’s “tough love” attitude and affection toward Joe led the other three sons to harbor resentment toward their father and racial prejudice toward their half-brother. After disrupting a cattle rustling attempt by his sons, Mike and Denny, Devereaux discovers that 40 of his cattle had died from a polluted stream. He and his sons also discover that a copper mine, located 20 miles away, is responsible for the pollution. Devereaux’s violent reaction to his discovery will not only lead to legal ramifications, but also further disruptions and tragedy.

I have never read “King Lear” or seen any of the screen adaptations of the actual play. Nor have I ever seen “HOUSE OF STRANGERS”. So, I have nothing to compare “BROKEN LANCE” with. All I can say that I enjoyed most of the film and was especially impressed by the film’s strong characterizations. Despite its Old West setting, “BROKEN LANCE” is not your typical Western. In fact, it is easy to see that it is basically a character drama. One might add there are plenty of Westerns that feature strong character drama. True. But aside from a minor gunfight and a brawl in one of the movie’s final scenes, this is no real action in “BROKEN LANCE”. This is a drama set in the Old West. I had no problem with this. Why? Because “BROKEN LANCE” is basically a damn good story about the disintegration of a family. What makes “BROKEN LANCE” a tragedy is that Matt Devereaux is responsible. That “hard-working” spirit that led him to become a wealthy cattle baron and dominate his family, also led his three older sons to dislike and resent him. Devereaux’s “spirit” also affected his business operation, took away three years of his youngest son’s life and in the end, even affected his oldest son.

I was also impressed by how the movie handled the topic of racism in this film. Granted, all of the non-white characters in the film seemed ideally likable – something that human beings of all ethnic and racial groups are incapable of being on a 24/7 basis. But at least they were not portrayed as simple-minded or childlike. Joe Devereaux came the closest to being naive, but that was due to his age. And even he developed into a more hardened personality. One of the best scenes that conveyed the racism that permeated in 1880s Arizona Territory featured Matt Devereaux being asked by the Territorial Governor to keep Joe from furthering any romance with the latter’s daughter, Barbara. It struck me as subtle, insidious, ugly and very effective.

The production values for “BROKEN LANCE” struck me as very admirable. Twentieth-Century Fox, the studio that produced and released the film, developed the CinemaScope camera to achieve wide lens shots – especially for their more prominent films between the early 1950s and late 1960s. Joseph MacDonald’s photography of Arizona and use of the CinemaScope camera struck me as very colorful and beautiful. Also adding to the movie’s late 19th Arizona setting were Lyle Wheeler (who won an Oscar for his work on 1939’s “GONE WITH THE WIND”) and Maurice Ransford’s art direction, the set decorations by Stuart A. Reiss and Walter M. Scott, and the scenic designs by an uncredited Jack Poplin. I also thought that Travilla’s costume designs for the film greatly added to the movie’s setting . . . especially those designs for the costumes worn by Jean Peters and Katy Jurado.

If there is one aspect of “BROKEN LANCE” that bothered me, it was the film’s last scene. I wish I could explain what happened, but I do not want to reveal any spoilers. Needless to say, I found it vague, unsatisfying and a bit unrealistic. I realize that writers Philip Yordan and Richard Murphy, along with director Edward Dmytryk, were more or less trying to follow the ending for “HOUSE OF STRANGERS”. But in doing so, I think they had failed to consider the film’s Western setting, along with the racial and ethnic makeup of the Joe Devereaux character. Otherwise, I had no real problems with the movie.

I certainly had no problems with the movie’s performances. Spencer Tracy was larger than life as the domineering Matt Deveareaux. He has always been one of those performers who can either give a subtle performance, or be very theatrical without chewing the scenery. He managed to be both in “BROKEN LANCE”. I have read a few review of the movie in which some were not that impressed by Robert Wagner’s performance as Deveareaux’s youngest son, Joe. Yes, I could have done with the slight make-up job to indicate Joe’s racial status. But I was impressed by Wagner’s performance. He did a very good job in conveying different aspects of Joe’s personality – from the enthusiastic young man, who is desperate to maintain peace within his family to the embittered man, who finally realizes how much his older half-brothers disliked him. Another excellent performance came Richard Widmark, who portrayed Deveareaux’s oldest son, Ben. There were times when Widmark almost seemed as larger than life as Tracy. Yet, he reigned in his performance a little tighter. But what I really found interesting about Widmark’s performance is that despite his character’s resentment of Deveareaux and racist dislike of Joe, he seemed to have a clear head on his shoulders and an awareness of how business had changed in the later years of the Old West. The only acting Oscar nomination went to Katy Jurado, who portrayed Deveareaux’s second wife, “Señora” Devereaux. I am a little perplexed by this nomination. Granted, she gave a very good performance as a Native American woman trying to maintain peace between her husband and three stepsons. But there was nothing about her performance that I thought deserved an Oscar nod. Frankly, I found her performance in 1952’s “HIGH NOON” a lot more impressive.

Jean Peters portrayed the Governor’s daughter and Joe’s love interest, Barbara. I thought she gave a spirited, yet charming performance. I was also impressed by how Peters conveyed Barbara’s strong-will and open-minded nature in regard to Joe’s Native American ancestry. Remember my comments about that scene between Deveareaux and the Governor? I believe what made this scene particularly effective were the performances of both Tracy and E.G. Marshall as the Governor. In fact, I would say that Marshall’s skillful conveyance of the Governor’s insidious racism in regard to Joe really sold this scene. Although their roles seemed lesser as Deveareaux’s second and third sons Mike and Denny, I thought both Hugh O’Brian and Earl Holliman gave effective performances. O’Brian’s Mike struck me as an insidious personality, who seemed to hover in the background, watching older brother Ben and their father battle over the family’s fortunes. And Holliman was equally effective as the gutless pushover Denny, who seemed more interested in clinging to whomever could make his life more easy than any resentful feelings toward his father and younger brother. The movie also featured solid performances from Eduard Franz, Carl Benton Reid and Philip Ober.

In the end, I rather liked “BROKEN LANCE” . . . a lot. I knew from my past viewing of the film that it was not a traditional Western, but more of a character-driven drama. And I thought director Edward Dmytryk, along with writers Philip Yordan and Richard Murphy did a first-rate job of translating William Shakespeare’s “King Lear” to this family drama set in the Old West. The movie also boasted first-rate performances from a cast led by Spencer Tracy and Robert Wagner. My only problem with the movie proved to be its last five minutes or so. I found the ending rather vague and lacking any consideration of the Old West setting and the racial background of the Joe Deveareaux character. Otherwise, I no further problems with the film. 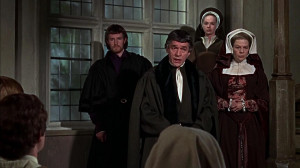 Below is a list of my favorite movies set during the 1500s: 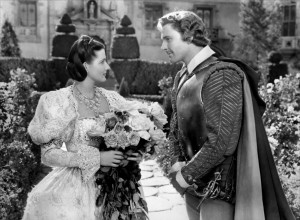 1. “The Sea Hawk” (1940) – Errol Flynn starred in this exciting, but loose adaptation of Rafael Sabatini’s 1915 novel about an Elizabethan privateer. Directed by Michael Curtiz, the movie starred Brenda Marshall and Henry Daniell. 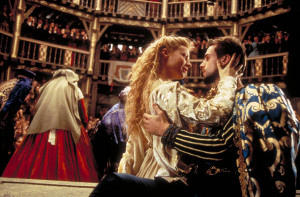 2. “Shakespeare in Love” (1998) – John Madden directed this Best Picture winner about how an imaginary love affair between playwright William Shakespeare and a wealthy merchant’s daughter that led to his creation of “Romeo and Juliet”. Joseph Fiennes and Oscar winner Gwyneth Paltrow starred. 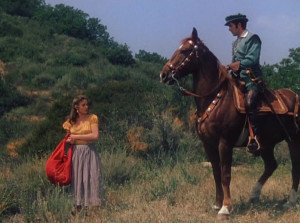 5. “Captain From Castile” (1947) – Tyrone Power starred in this adaptation of Samuel Shellabarger’s 1945 novel about a Spanish nobleman’s experiences during the Spanish Inquisition and Hernan Cortez’s conquest of the Aztecs in Mexico. Directed by Henry King, the movie co-starred Jean Peters and Cesar Romero. 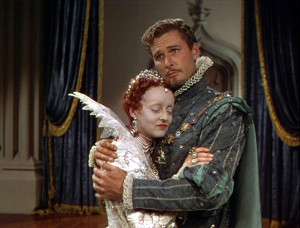 6. “The Private Lives of Elizabeth and Essex” (1939) – Bette Davis, Errol Flynn and Olivia de Havilland starred in this adaptation of Maxwell Anderson’s 1930 Broadway play, “Elizabeth the Queen”, a fictionalized account of the relationship between Queen Elizabeth I and the 2nd Earl of Essex. Michael Curtiz directed. 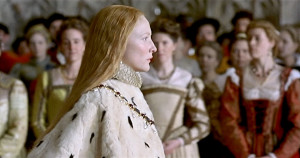 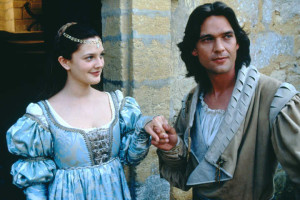 8. “Ever After” (1998) – Drew Barrymore starred in this loose adaptation of “Cinderella”. Directed by Andy Tennant, the movie co-starred Anjelica Houston and Dougray Scott. 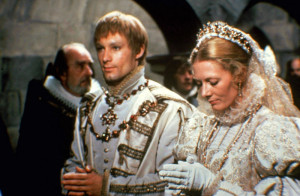 9. “Mary, Queen of Scotland” (1971) – Vanessa Redgrave starred in this biopic about the life of Queen Mary of Scotland. Directed by Charles Jarrott, the movie co-starred Timothy Dalton, Nigel Davenport and Glenda Jackson. 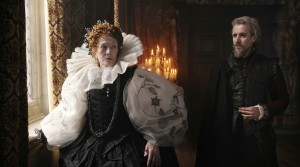