Being an aficionado of old Hollywood period dramas, I noticed that it was rare to find movies set in the antebellum North. Very rare. I have tried to think of how many of these films I have come across. And to be honest, I can only think of four or five so far, in compare to the numerous films set in the antebellum South. One of those Northern antebellum tales proved to be the 1946 movie, “DRAGONWYCK”.

Based upon Anya Seton’s 1944 novel, adapted by Joseph L. Mankiewicz and directed by him; “DRAGONWYCK” began in 1844 Greenwich, Connecticut; when Miranda Wells, the daughter of a religious farm couple, receives a letter from distant cousin Nicholas Van Ryn. Nicholas, the autocratic and charming owner (Patroon) of a Hudson River Valley estate called Dragonwyck, asks if one of Ephraim and Abigail’s daughters could act as governess for his eight year-old daughter, Katrine. Miranda, who daydreams about a more romantic and luxurious lifestyle, manages to convince her doubting parents to let her go.

Upon her arrival at Dragonwyck, Miranda meets the young Katrine and Nicholas’ wife, a gluttonous, yet slightly high-strong woman named Johanna. She also meets the handsome local doctor, Dr. Jeff Turner, at the “kermess” – a ceremony where landowner Nicholas receives the rents of his tenants. Not only does Miranda become aware of the strange atmosphere at Dragonwyck and the tense relationship between Nicholas and his tenants; she also finds herself falling in love with her cousin and employer . . . and he with her. This budding relationship between the pair proves to be quite disastrous for all concerned.

After my second viewing of “DRAGONWYCK”, I realized that I could never regard it as a personal favorite. The writing for some of the film’s supporting characters struck me as theatrical and one-dimensional. Unfortunately, I have to include the Ephraim Wells character, who came off as a clichéd version of the 19th century religious American male and Peggy, the young maid loyal to Miranda. During the film’s third act, the narrative revealed that Nicholas Van Ryn’s lack of religious belief. Was this supposed to cap his position as an immoral and villainous man? Because honestly . . . I realized that I could not care less about his lack of belief. And I found it ridiculous that his status as a non-believer was supposed to be a sign of his villainy. I understand. Perhaps the majority of moviegoers felt differently in 1946. Needless to say, this aspect of Nicholas’ character did not age well over the past 72 to 73 years. I was not that impressed by the film’s finale in which Nicholas had a showdown with his discontented tenants. Although it featured an excellent performance by Vincent Price, I found the actual sequence a bit anti-climatic. I noticed that the film’s ending was different from the one written by Anya Seton. However, I found Seton’s ending in the novel more dramatic, but somewhat ludicrous. I could see why Mankiewicz had changed the ending.

Although I could never regard “DRAGONWYCK” as a personal favorite of mine, I must admit that I found it to be a rather first-rate film. The movie – the story itself – struck me as a prime example of American Gothic literature. In fact, I would go as far to claim that the narrative almost reminds me of Charlotte Brontë’s 1847 novel, “Jane Eyre”, but with a darker twist. Unlike Brontë’s tale, “DRAGONWYCK” included the specter of murder and class conflict. The latter included the historical conflict known as the Anti-Rent War, in which tenants in upstate New York revolted and declared their independence from the manor system operated by patroons, by resisting tax collectors and successfully demanding land reform between 1839 and 1845.

One would think that the Miranda Wells character would be the narrative’s center or force. A part of me feels sad that I cannot make that claim. For the most interesting aspect of “DRAGONWYCK” proved to be the Nicholas Van Ryn character. Was he supposed to be a mere villain? If a person viewed him from how he had ended his marriage to the voracious Johanna, he or she could regard him as such. On the other hand, I found it difficult to regard his refusal to embrace his wife’s new-founded religious fervor as monstrous. Which meant that in the end, Nicholas became something of a repellent, yet fascinating character to me. A true force of nature. I wish I could have said the same about Miranda. I found her charming and extroverted, but after her marriage to Nicholas turned sour, she became something of an annoyance. Being the offspring of religious parents, I was not surprised that she eventually turned to religion. But I found it annoying that religious fervor was the only literary device used to develop her character and nothing else. Nicholas, on the other hand, proved to be a lot more complex.

A part of me wishes that “DRAGONWYCK” had been filmed in Technicolor. It would have been interesting to view Twentieth Century-Fox’s version of antebellum New York State in color. Especially the Hudson River Valley. I am not begrudging Arthur C. Miller’s cinematography. His work for the film’s interior shots, especially those for the Dragonwyck manor had provided a great deal of atmosphere, adding to the film’s Gothic narrative. But I was not that impressed by the exterior shots. I must admit that I have no memories of the film’s score by Alfred Newman. I thought Lyle R. Wheeler and J. Russell Spencer’s art direction, along with Thomas Little’s set decorations were excellent . . . especially for the Dragonwyck manor and New York City hotel’s interiors. However, I truly enjoyed René Hubert’s beautiful costume designs for the movie. Were they accurate examples of mid-1840s fashion? I have my doubts. But as the images below reveal, they were gorgeous: 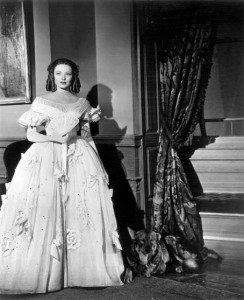 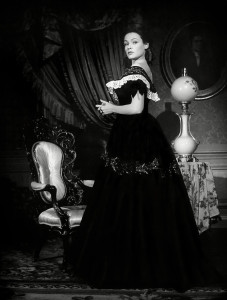 I might as well focus on the movie’s actual performances. Were there any bad performances? No. “DRAGONWYCK” can honestly boast some solid or excellent performances. The supporting cast featured some solid performances from the likes of Harry Morgan as one of Nicholas’ angry tenants, Connie Marshall as Nicholas’ daughter Katrine, and Trudy Marshall as neighbor Elizabeth Van Borden. Future Oscar winner Jessica Tandy’s portrayal of Miranda’s Irish-born maid Peggy O’Malley struck me as a bit theatrical. I could also say the same about another future Oscar winner Walter Huston, who portrayed Miranda’s religious father Ephraim Wells. Anne Revere’s portrayal of Miranda’s mother Abigail Wells seemed a lot more subtle . . . and skillful. Spring Byington portrayed the Van Ryns’ manipulative and slightly creepy maid Magda. A part of me wondered if it was Mankiewicz or Seton’s intention to create a more benign version of the Mrs. Danvers character from “REBECCA”. Vivienne Osborne, on the other hand, gave a very skillful performance as Nicholas’ first wife, the gluttonous and insecure Johanna Van Ryn. I did not know whether to share Nicholas’ disgust for her or feel any sympathy toward her for being married to a creep.

I was prepared to dismiss Glenn Langan’s performance as the handsome local physician, Dr. Jeff Turner, who befriends Miranda. I had assumed that he would be another one of those bland leading men that the Hollywood system tried to transform into a movie star. After my recent viewing of “DRAGONWYCK”, I realized that Langan gave an interesting performance by skillfully conveying Jeff’s barely concealed anger toward Nicholas’ arrogance. However, my vote for the best performance would go to Vincent Price’s portrayal of Nicholas Van Ryn. I thought he gave a brilliant and dynamic performance as the arrogant, yet charismatic Nicholas, whose villainy proved to be rather enigmatic. Gene Tierney did an excellent job in carrying the film as the lead Miranda Wells. I was very impressed by her portrayal of the more ebullient and naive Miranda during the first two-thirds of the film. But once Miranda’s marriage to Nicholas began to fail, Tierney’s portrayal of the character fell flat. I do not blame her. I blame the manner in which the character had become one-dimensional, thanks to Anya Seton’s novel and Joseph Mankiewicz’s screenplay.

Overall, I rather enjoyed “DRAGONWYCK”. It was not perfect. No film is. But I was a little put off by some theatrical acting in the film, the decline of the Miranda Wells character and the writing overall during the movie’s final fifteen to twenty minutes. But I must admit I enjoyed most of the film’s narrative. Many would dismiss it as costume melodrama. Personally, I see no reason to dismiss melodrama. It can be appreciated, if written well like other forms of fiction. Thanks to Joseph Mankiewicz’s screenplay and direction, along with a competent cast led by Gene Tierney and Vincent Price; “DRAGONWYCK” proved to be more entertaining than I had previously surmised.