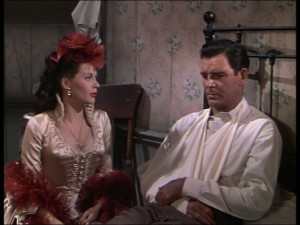 While perusing the Internet on the career of actress Yvonne De Carlo, I noticed that she made a handful of conventional costume pictures for Universal Pictures, after she had signed a long-term contract with them in 1946. One of those films was the 1948 movie, “RIVER LADY”.

Set in the upper Mississippi River Valley during the decade after the Civil War, “RIVER LADY” is an adaptation of Frank Waters and Houston Branch’s 1942 novel. It told the story of a conflict between the citizens of a Minnesota mill town, the loggers who worked downstream and the lumber mill owners. The representative of a local lumber syndicate named Bauvais wants to purchase a struggling lumber mill from its owner, H.L. Morrison. But the latter refuses to sell. However, the owner of a gambling riverboat owner named Sequin manages to purchase the mill in order to provide a reputable job for her boyfriend, Dan Corrigan, a lumberjack whom she loves. However, Sequin has a rival in Morrison’s only daughter, Stephanie. When the latter learns about Dan and Sequin’s engagement, she exposes Sequin’s purchase of the Morrison mill. Dan becomes enraged when he realizes that his fiancee has manipulated his life and in a drunken fit, rejects the riverboat owner and marries Stephanie. Business sparks eventually ignite between a vengeful Dan and an angry Sequin, who has aligned herself with the mercenary Bauvais.

Did “RIVER LADY” have the potential to be a pretty good movie? I do not think so. Frankly, I found it difficult to summon the energy to get excited over a messy rivalry involving the lumber business in 1870s Minnesota. And I am confused over Sequin’s role in this story. She purchased part of the Morrison lumber mill for lumberjack Dan Corrigan. But once he had dumped her, why was there no conflict between her and Morrison over Dan’s role in the business? Instead, she sat back and watched him use the business to engage in a conflict with her other business partner, Bauvais. Would it have not been easier if the writers could have found another reason for Sequin and Dan’s breakup? And why would Dan be so upset over Sequin manipulating him into a major position with the Morrison lumber mill . . . and not express any anger over the ugly manner in which Stephanie Morrison had interfered in his upcoming marriage? Odd.

Then again, I also realized that I did not really like most of the characters in this movie. To be honest, I just did not find them that interesting. Except for two . . . namely Sequin and Bauvais. I would never regard either of them as nice, but Yvonne De Carlo and Dan Duryea did such excellent jobs in making both of them interesting and dynamic that it seemed a pity that neither ended the movie on a happy note. Rod Cameron and Helena Carter gave solid performances as lumberjack-turned-businessman Dan Corrigan and his bride, Stephanie Morrison. But to be honest, their performances seemed like a walk in the park in compare to DeCarlo and Duryea. And as a leading man, Cameron did not exactly rock my world . . . if you know what I mean. The movie also featured solid performances from John McIntire, Lloyd Gough, Florence Bates and Anita Turner. Only Turner really impressed me, for I found her portrayal of the Morrisons’ maid Esther rather witty. However, none of the cast members were not helped by D.D. Beauchamp and William Bowers’ dialogue, which seemed more appropriate for a 1940s crime melodrama, instead of a film set in the mid-to-late 1800s.

I have no idea on whether “RIVER LADY” was a “B” movie or not. It feels like a “B” movie, despite having a cast that featured the likes of De Carlo, Duryea, Cameron and McIntire. As a frequent visitor of the Universal Studios Hollywood Theme Park, it is pretty obvious that a good deal of the movie was filmed on that studio’s back lot. And although the costumes designed by Yvonne Wood struck me as pretty colorful, a bit too much of late 1940s fashion seemed to have crept into some of De Carlo and Carter’s 1870s costumes.

What else can I say about “RIVER LADY”? Despite first-rate performances from Yvonne De Carlo and Dan Duryea, along with the colorful production; this is a movie that I doubt I would be interested in watching again. Once was enough.