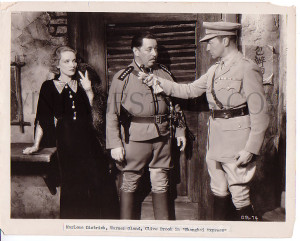 Many years have passed since I last saw the 1932 movie, “SHANGHAI EXPRESS”. Many years. In fact, the last time I saw it was on late night television back in the early 1990s. But I had such difficulty in finding it on VHS and later, on DVD that I never thought I would see it again . . . until I recently viewed it online.

Also among the passengers are a British Army doctor named Captain Donald “Doc” Harvey and two high-priced “coasters” (prostitutes) – Hui Fei and the notorious coaster, “Shanghai Lily”. The train journey marked the reunion between “Doc” Harvey and “Shanghai Lily”, who had been lovers five years ago, when he knew her as a woman named Magdalen. Back then, Magdalen had played a trick on Harvey to test his love for her, but it backfired and he left her. Upset over the loss of Harvey, Magdalen became a courtesan, And according to her, “It took more than one man to change my name to Shanghai Lily.” Lily informs Harvey that she still loves him and it becomes apparent that his feelings for her have not changed.

When government troops stop the train to search and arrest an enemy agent, the mysterious Henry Chang is revealed to be a powerful warlord, who is the agent’s commanding officer. He sends a telegram and hours later, rebel troops loyal to him stop the train and take the first-class passengers hostage. Chang intends to find the right passenger he can use as barter to get back his spy. And he finds that passenger in Captain Harvey, who is on his way to perform brain surgery on a British official in Shanghai.

“SHANGHAI EXPRESS” managed to earn three Academy Award nominations – Best Picture, Best Director for Sternberg and Best Cinematography for Lee Garmes. Only Garmes won a statuette. And it was a well deserved win. The movie’s look has gained a reputation for its lush and atmospheric photography, especially in the way he shot the movie’s star, Marlene Dietrich. A famous example of the movie’s photography could be found in the shot below:

There were other memorable moments that made the movie’s photography so memorable. Moments that include the passengers boarding the train, the takeover of the train by Chang’s men, and the two leads’ arrival in Shanghai. But the moment that really impressed me featured the train’s departure from Beiping. Not only did I find the photography in that scene impressive, but also Hans Dreier’s art direction.

“SHANGHAI EXPRESS” struck me as the type of story that would have made a perfect summer blockbuster, if given a bigger budget and a little more action. But Jules Furthman’s story did not exactly knock my socks off. And von Sternberg’s slightly turgid direction could not exactly light a fire under it. Also, there were certain aspects of the story that I found questionable. Considering the circumstances behind Magdalen’s breakup from Donald Harvey, I found it hard to swallow that this would drive her to become a high-priced prostitute in China for five years. I simply found that ludicrous. And Chang decided to take the train passengers hostage “before” discovering which one could be used to get his spy back. I could not help thinking it would have been more prudent to search for that valuable hostage first, before capturing the entire train.

For a movie that featured sex, travel, romance and intrigue; there was very little action in this film. I realize this movie was made and released in 1931-32, and not in 2011-12. But even for an early 30s movie, it had very little action, considering its story line. Also, good old-fashioned early 20th century racism reared its ugly head in Chang’s dealings with Magdalen and her fellow prostitute Hui Fei. The Eurasian warlord wanted both women, but was only willing to rape Hui Fei. In 1931-32 Hollywood movies, a non-white man could not soil the depths of a white woman, even if she was a whore.

The cast seemed pretty solid. But if I must honest, I could not find an exceptional performance within the cast. Marlene Dietrich gave a solid performance as the soiled Shanghai Lily. And that is the best I can say about her. She was not exactly at the top of her form as an actress in the early 1930s. Garmes . . . or should I say von Sternberg’s photography contributed to her status as a film icon after a year or two in Hollywood, not her acting skills.

Dietrich was supported by the likes of Clive Brook, Anna May Wong, and Warner Oland. Of the three performers, the Swedish-born Oland ended up looking the best. Despite portraying the villainous Chang, he managed to give a relaxed, yet commanding performance without resorting to any hammy acting or posing. Anna May Wong also managed to restrain from any histronics. And her character’s actions near the end of the film saved the lives of the other passengers. But she barely had twenty lines, let alone ten lines in the movie; and spent the first two-thirds of the movie looking iconic . . . and playing cards. Why on earth did von Sternberg cast British actor Clive Brook as Dietrich’s love interest, British Army Captain Donald “Doc” Harvey? Why? He was so wrong for the role. Brook was perfect as the patriarch of the Marryot family in Noel Coward’s 1933 sentimental family saga, “CAVALCADE”. But as the dashing, yet bitter Captain Harvey, he seemed out of his depth. And his chemistry with Dietrich struck me as rather flat. I hate to say this, but he was no Gary Cooper. Thankfully, other supporting players such as Eugene Pallette, Louise Classer Hale and Lawrence Grant provided plenty of comic relief and color as some of the other train passengers.

I realize that “SHANGHAI EXPRESS” is one of those highly regarded films from the Pre-Code Era. But after watching it, I could not help but feel that it might be slightly overrated. Yet, I could not deny that despite its flaws, it is a beautiful and exotic-looking film with an entertaining story. More importantly, it is an example of Josef von Sternberg’s work and Marlene Dietrich’s beauty at their heights.