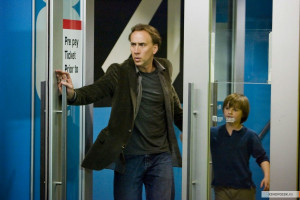 Nearly nine years ago, Nicholas Cage starred in a science-fiction disaster film with a plot that took me by surprise, when I saw it. Directed by Alex Proyas and written by Ryne Douglas Pearson and Juliet Snowden, the movie proved to be a surprise box office hit, despite mixed reviews.

“KNOWING” told the story about M.I.T. professor John Koestler, whose son Caleb stumbles across a piece of paper from a time capsule that had been dug up at his son’s elementary school fifty years ago. In it are some chilling predictions of disasters – some that have already occurred and others that are about to occur in the near future. This discovery leads Koestler to believe his family plays a role in the events that are about to unfold, as he sets out to prevent the ultimate catastrophe.

I must admit that I had not been that eager to see “KNOWING”, when it first came out in 2009. Cage’s previous movie, “BANGKOK DANGEROUS”, had been such a piece of crap. And if I must be brutally honest, his movie choices have been mixed for quite some time. But after learning that the movie had managed to reach the number one spot on the U.S. box office, I decided to give it a shot. Fortunately, “KNOWING” turned out to be somewhat of an improvement from “BANGKOK DANGEROUS”. Pearson’s intriguing story, along with the screenplay co-written with Snowden, Alex Proyas’ direction and Cage’s performance helped a bit. I was especially impressed by one sequence that featured a commercial plane crash that occurred not far from where Cage’s character was stuck in a traffic jam, in the middle of a highway. I liked how Proyas and cinematographer Simon Duggan hinted the horrors of the crash’s aftermath through the use of rain, fire, smoke and soot-covered bodies, instead of giving the audience more graphic images. It was probably the best moment in the film.

In the end, what started as a mystery surrounding a series of natural and man-made disasters turned into one of those “end of the world” stories. It seemed a group of aliens have been using the codes found on the list of disasters to warn children all over that the world was about to end, due to a massive solar flare that will have a global affect. This turn in the plot seemed to have a negative affect on the movie, transforming it from an intriguing mystery into a rather depressing and frantic tale. Rose Byrne, who portrayed the daughter of the young student who first left the mysterious piece of paper in the time capsule, did not help matters when her performance spiraled into a hammy rendition of a frantic mother trying to save her daughter and herself from being caught up in the oncoming apocalypse. Even worse, the story’s narrative ended up reminding me of the plot for 2008’s “THE DAY THE EARTH STOOD STILL”. And I found that rather unoriginal on the screenwriters’ parts.

Most of “KNOWING” proved to be . . . okay. The movie’s three stars – Nicholas Cage, Rose Byrne and Chandler Canterbury – gave solid performances. So did the supporting cast that included Ben Mendelsohn and Liam Hemsworth. And yes, the movie spiraled into a theatrical “end of the world” story. But despite the movie’s over-the-top ending and switch from an intriguing mystery to a badly handled disaster film, I found “KNOWING” rather tolerable. I would not mind watching it again . . . on cable television.